The Mark of the Beast Explained 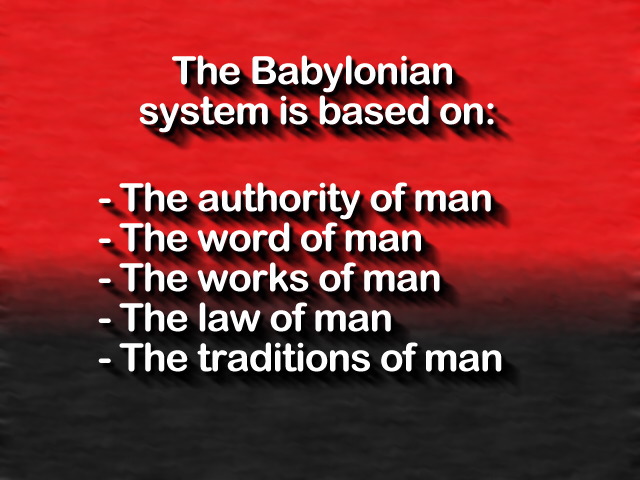 othing written here is meant to condemn God-fearing people who are sincerely ignorant of such things. But, there is a power on earth with leadership who desire to have your worship! These same people will use tradition to keep the counterfeits alive. And what did Jesus say about tradition?

Mark 7:7 "In vain they do worship me; teaching for doctrines the commandments of men. However, this church teaches that Scripture plus tradition is a safe rule to follow. 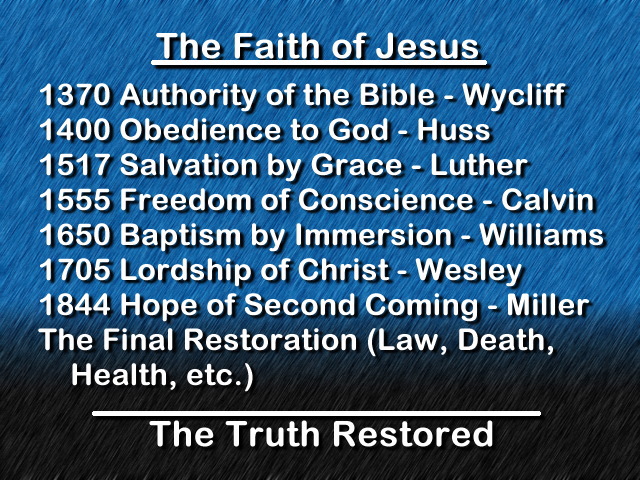 aniel 2, Daniel 7, and Revelation 13 form a timeline indicating that we are living in the last days. Jesus Christ will come soon. But, before He does, the antichrist will be revealed. The best definition of antichrist is not 'against Christ'. It is 'in the place of' Christ. There is a church on earth that claims to have power to forgive sin. That happens every week in this church. The facts and the statements from this church speak for themselves. Don't blame the messenger.

his church teaches that priests have power to forgive sin. Jesus passed on his mission to forgive sins to his ministers, telling them, "As the Father has sent me, even so I send you. . . . Nobody, no human being, has the right to forgive sin because all human beings are sinners to begin with. See Romans 6:23.

ne sign, or mark, of the beast's power is the ability to change times and laws. See Daniel 7:25.

There are two main powers in Revelation 13. History tells us that the first Sunday law was promulgated by the Emperor Constantine in 321 AD. To worship on the venerable day of the sun was the law of the land from that time on. The medieval (Catholic) church just carried on with that tradition and has done so until this day. There were pockets of Sabbathkeeprs all over Europe who were persecuted, burned at the stake, choked to death in caves, and killed by the millions in various other ways for their Sabbathkeeping beliefs. The pope died in captivity in 1798 and a Concordat (agreement) was signed in 1929 that ended the deadly wound, ceding land in Rome called Vatican City to the papacy and making other concessions to the papacy. Today it is hard to overestimate the reach and influence of the papacy over its 1.1 billion members. For these reasons, and others, scholars have come to the conclusion that the Roman Catholic Church is the first beast of Revelation 13.

he second power of Revelation 13 is described as follows:

11). And I beheld another beast coming up out of the earth; and he had two horns like a lamb, and he spake as a dragon. 12) And he exerciseth all the power of the first beast before him, and causeth the earth and them which dwell therein to worship the first beast, whose deadly would was healed." 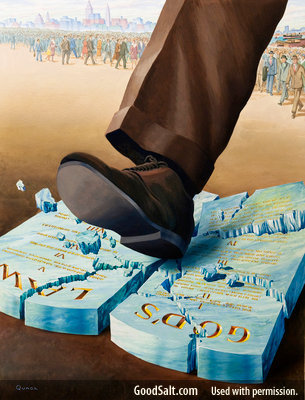 r, put another way, Revelation 13:9 "And the third angel followed them, saying with a loud voice, If any man worship the beast and his image, and receive his mark in his forehead, or in his hand.,"

t is apparent from Revelation 14:12 that this mark is related to keeping the commandments of God. Persecution results from not going along with the majority in religious matters. There will be Sunday closing laws enacted or updated to cause all to rest on Sunday and work on Saturday (Sabbath). Sabbathkeepers will be singled out by their behavior as Sabbathkeepers and fined, put in jail, lose their jobs (and lives). Can this happen in America? Yes it can! A country "speaks" by the laws it makes. There have been Sunday closing laws in the United States since 1610. Some of them were punishable by death! There has been an ongoing battle between individual rights (including religious liberty) and the overreaching power of the state since the United States was founded. The shift is certainly going in the direction of state control and government intrusion into the personal lives of its citizens. The day is coming when the government of the Unite States will pay homage to the papacy by honoring Sunday-keeping as a mark of the pope's authority in religious matters. The mark of the beast is Sunday-keeping, and the United States is well on its way to passing a broad, national, Sunday law. It may take the form of a family day, a day of rest, or some other benign reason, but the effect will be trampling on the rights of conscience!

With the pope's recent visit to the United States, it is becoming much easier to see how all the world wonders after the beast.


Revelation 13:3-8 "And I saw one of his heads as it were wounded to death; and his deadly wound was healed: and all the world wondered after the beast.
4 And they worshipped the dragon which gave power unto the beast: and they worshipped the beast, saying, Who is like unto the beast? who is able to make war with him?
5 And there was given unto him a mouth speaking great things and blasphemies; and power was given unto him to continue forty and two months.
6 And he opened his mouth in blasphemy against God, to blaspheme his name, and his tabernacle, and them that dwell in heaven.
7 And it was given unto him to make war with the saints, and to overcome them: and power was given him over all kindreds, and tongues, and nations.
8 And all that dwell upon the earth shall worship him, whose names are not written in the book of life of the Lamb slain from the foundation of the world."

he mark of the beast is exactly that - a mark. But, not a tradtional mark like a tattoo or implanted computer chip. The mark of authority of a power is the willingness of the people to go along with the commands and dictates of that power. In this case, nobody has the authority by the Word of God to change any words in the Bible or create new traditions that go contrary to God's Word. The Catholic Church has done exactly that. Its words go out worldwide in this day of mass communication and heads of state as well as the general population hang on every word. God's law had been changed and the works of man have been substituted for the grace of Jesus Christ and His atonement.


Further Explanation of the word mark

Father Enright, President of Redemptorist College in America: "It was the Holy Catholic Church that changed the day of rest from Saturday to Sunday, the first day of the week. And it not only compelled all to keep Sunday, but also urged all persons to labor on the seventh day under pain of anathema. Protestants ... profess great reverence for the Bible, and yet by their solemn act of keeping Sunday, they acknowledge the power of the Catholic Church. The Bible says, 'Remember the Sabbath day to keep it holy.' But the Catholic Church says, 'NO: Keep the first day of the week' and lo, the entire civilized world bows down in reverent obedience to the command of the holy Catholic Church."

C. F. Thomas, Chancellor of Cardinal Gibbons, in answer to a letter regarding the change of the Sabbath: "Of course the Catholic Church claims that the change was her act. And the act is a mark of her ecclesiastical power and authority in religious matters." Thus, the issues become plain - God says that He is the true God: He has given the Sabbath as a seal of His authority as the Creator of all. By keeping the Sabbath, we recognize His authority as the true God. But the Catholic Church appears and says in effect, "No, don't keep the Sabbath; keep the first day of the week. We changed it, and that change is a mark of our power to overrule God's law and authority."

It has taken millenia to get to the point of human history where there is a country that originally championed individual religious freedom the way the United states has through its Constitution and Bill of Rights. The influence of the papacy on the United States has yet to be realized in its fullness. The time in coming when Congress and the Supreme Court will pay homage to the beast by upholding a Sunday law, which will severely restrict life in the United States, forever change the country, and usher in the second coming of

"The banner of truth and religious liberty held aloft by the founders of the gospel church and by God's winesses during the centuries that have passed since then, has, in this last conflict, been committed to our hands. The responsibility for this great gift rests with those whom God has blessed with a knowledge of His word". Ellen White, The Acts of the Apostles, p. 68.

"The Sabbath will be the great test of loyalty, for it is the point of truth especially controverted. When the final test shall be brought to bear upon men, then the line of distinction will be drawn between those who serve God and those who serve Him not. While the observance of the false sabbath in compliance with the law of the state, contrary to the fourth commandment, will be an avowal of allegiance to a power that is in opposition to God, the keeping of the true Sabbath, in obedience to God’s law, is an evidence of loyalty to the Creator. While one class, by accepting the sign of submission to earthly powers, receive the mark of the beast, the other choosing the token of allegiance to divine authority, receive the seal of God." Great Controversy, Page 605

Oh, how precious to Luther was this new and glorious light which had dawned upon his dark understanding and driven away his superstition! He prized it higher than the richest earthly treasure. The Word of God was new. Everything was changed....Raising his voice against the errors and sins of the papal church, he earnestly endeavored to break the chain of darkness which was confining thousands and causing them to trust in works for salvation. He longed to be enabled to open to their minds the true riches of the grace of God and the excellence of salvation obtained through Jesus Christ." Early Writings, P223.